Corning Children's Center strives to set the standard in early care and education by inspiring learners, leaders and dreamers.

Our program was among the first early-childhood centers to receive accreditation from Middle States, and we have maintained this accreditation since 2005. 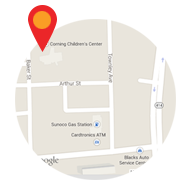