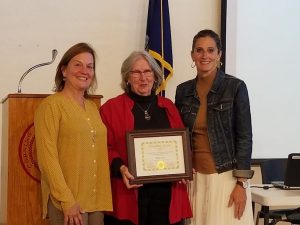 Peigi Cook has set the standard in the early childhood education field since she began her career almost 40 years ago. She relocated to the Corning area to accept the Executive Director position at Corning Children’s Center in 1993. Peigi has been an active leader at the Corning Children’s Center for 23 years, helping it grow from a small organization in a church basement to the state-of-the-art Center it is today.

Peigi not only adheres to professional standards within the field of early childhood education but works hard to push the standards forward. She introduced the concept of Continuity of Care to Corning Children’s Center in 2000, 16 years before it was included in the New York State Regulations as a valued concept. More recently, Peigi introduced a Mandarin Immersion Program concept to the Center that has been implemented into nine classrooms for 130+ children ages 18 months to 5 years old. These are just two examples of how Peigi has been a leader in the field of early childhood care and education.

Presented by the Early Childhood Department of Corning Community College, the award honors a professional provider in the field of Early Childhood who embodies the qualities of professionalism and leadership in their daily work settings. The award application states, “Within our local communities, we know there are many people who have devoted themselves to being true models of Developmentally Appropriate Practices and now we are excited to establish this award process and showcase some outstanding individuals who work with children.”

Criteria for applicants include:
• Adheres to professional standards within the field of Early Childhood
• Develops a partnership with young children and their families
• Models professionalism in everyday practices
• Displays a commitment to continual growth and learning in the field
• Effectively demonstrates leadership skills